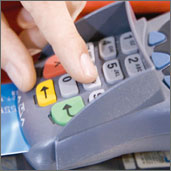 some nasty little bastard in the far east - Bangkok to be precise has managed to get the details of my credit card (probably from another equally nasty little bastard over here in the UK) & clone them onto another card and then withdraw a large sum of cash from an ATM!

So much for Chip & PIN making life more secure then?

Luckily, my bank managed to spot the unusual withdrawal quickly & contact me within 90 minutes to see if I was in actual fact in Bangkok, which I wasn't. Given that I was in the UK & my card was with me, they understood that I've nothing to do with the fraud & will refund me completely.
Posted by Ricey at 6:29 pm No comments:

BBC News Science & Nature Section reports that the first Swede is about to be sent into orbit on the Space Shutte Discovery, my question is one of vegetable discrimination - when are they going send a Turnip into space?

I think I may have been listening to Jonathan Ross too much!?
Posted by Ricey at 3:18 pm No comments:

....until the latest installment of the Bond movie series is released to the general public - Casino Royale, starring the new James Bond - Daniel Craig.

From the clips I have seen, it looks fantastic, sounds great (score by David Arnold again) and the new Aston Martin DBS featured looks beautiful. Let's just hope the reviews saying that the plot is better & all round the characters & actors that play them are more convincing are true.

Last night on ITV1 David Walliams hosted an hour long special fetauring interviews with various Bond related celeb's & fans, most of whom he asked the question "do you think I would make a good Bond?", nearly all said no.

Having grown up with the movies from childhood to the present, almost every man in his 30's or more probably thinks like David that they would make a good Bond, sadly they are also deluding themselves.
Posted by Ricey at 8:54 pm 1 comment: 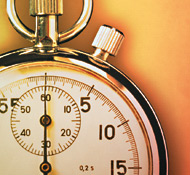 Latest research by Akamai (didn't know who these people were until I read this article, they look interesting from a technology viewpoint) & reported by the BBC News Website confirms my thoughts & way of browsing & shopping on this interweb thingy....

Websites face four-second cut-off
Shoppers are likely to abandon a website if it takes longer than four seconds to load, a survey suggests.

The research by Akamai revealed users' dwindling patience with websites that take time to show up.

It found 75% of the 1,058 people asked would not return to websites that took longer than four seconds to load.

The time it took a site to appear on screen came second to high prices and shipping costs in the list of shoppers' pet-hates, the research revealed.
Posted by Ricey at 11:02 pm No comments:

The BBC News Website reports on the latest Supercomputer in use by academics in the UK has been upgraded. Makes my current research for a home PC upgrade look a little insignificant.

Still a long way behind the US based academic stuff & probably a little behind what is sat in an MoD bunker somewhere secret, but all probably a giant leap behind the computing power available to the CIA\US Secret Service.

The UK's fastest-proven supercomputer used by the academic community has doubled in size and performance.

The HPCx machine, based in Warrington, is now capable of operating at speeds up to 15.4 teraflops, or 15.4 trillion calculations every second.

The speed boost follows the addition of more than 1,200 processors to the four year-old, IBM-built number-cruncher.

The high-performance machine is used by scientists to simulate everything from ocean currents to biological cells.

The upgrade will allow scientists to run more complex models on the machine. "What we've done throughout the computer's life is to keep the machine abreast of the way that computers are getting faster as a whole," said Professor Arthur Trew, director of the Edinburgh Parallel Computing Centre which heads the consortium that runs the system. "The problem is that the demand for computational ability always outstrips the machine's ability to deliver it."

When HPCx first came into service in 2002 it was one of the top 10 fastest supercomputers in the world. Despite an upgrade in 2004, it has since slipped to 59th place in the Top 500 supercomputers list.

Although the upgrade will undoubtedly push HPCx up the rankings in the new list, published on 14 November 2007, the UK government and research community have already decided to replace it with a higher spec machine known as Hector.

Hector, or the High-End Computing Terascale Resource, will be owned by the Research Councils of the UK and will start operating in 2007. HPCx is planned to cease working in December 2008. Hector could run at speeds of up to 100 teraflops, 100,000 times faster than an ordinary computer.

However, its normal operating speeds will be far less as supercomputers are only able to achieve their maximum speeds for short bursts of time.
Posted by Ricey at 7:16 pm No comments:

For years I've seen TV programmes on UFO sightings in the UK saying that Hampshire\Wiltshire is a haven for UFO crop circles and that the Norfolk\Suffolk area has been the "Hotspot" for UFO sightings & activity, most people put the fast moving lights down to the US Airforce flying either conventional stuff or secret stuff out of their bases there, but no-one could explain other strange things that happened like power surges or cars cutting out, all these things that made the UFO believers case even stronger (in their own minds). Until now....

The Ministry of Defence has admitted that a fault at a radar dome was responsible for causing electrical problems with dozens of cars.

Engines and lights cut out and speedometer dials swung up to 150mph as motorists drove past the dome.

At the time the MoD said there was no guarantee that the Trimingham radar on the north Norfolk coast was the cause.

It now says it will consider claims for compensation after an inquiry found the radar was "out of alignment".
Posted by Ricey at 5:54 pm No comments: