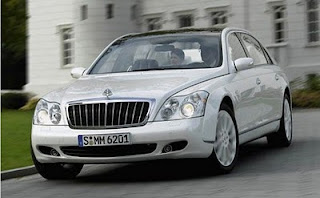 "Since its launch eight years ago, Maybach has largely been characterized as a failed venture. The ultra-premium counterpart to Mercedes-Benz never reached the sales figures which its rivals Bentley (part of the VW) and Rolls-Royce (owned by BMW) have enjoyed in the superstrata of the luxury car market."

"In the face of even further lagging sales, however, reports now indicate that Daimler is preparing to wind down the brand and phase it out entirely. But not before the line-up gets a mild refresh. After that, Mercedes hopes to fill the niche with more exclusive versions of the S-Class...."

I've never quite got the idea of the Maybach when there are other very well established brands & models out there which have fulfilled the requirements of the super rich for a long while before the Maybach brand was re-launched. Having seen quite a few up close & driving around London, they look quite un-inspiring & bland, probably why they haven't done that well.
Posted by Ricey at 8:34 am 1 comment: