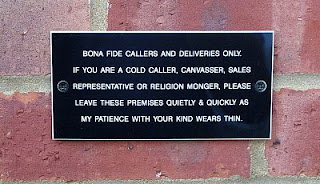 This has been up at my door for a couple of years, but it has of late caused great hilarity amongst visitors to my house, including delivery drivers and other bona fide callers. Even to the point where some have made a note of the text, so that they can get their own made up.

It works for the most part, apart from mute Polish artists selling their crappy artwork door to door. It certainly keeps the Jehovah's away!!
Posted by Ricey at 8:36 pm No comments:

I've had an idea..... I'm going to consume alcoholic beverages from one of the countries playing in the FIFA 2010 World Cup on the days they are playing - hopefully whilst watching the game - the time difference & schedule is kind for a change.

I plan to Google the national beverage\drink of each country, so for Uruguay it will be Grappmiel - a mixture of Honey & Grappa - I feel a trip to a London Department store coming on!? For Mexico it will clearly be either Sol beer or Tequila - probably in a Lime Margarita, for Brazil it will have to be a Caipirinha made with Cachaca, Germany is a Becks beer or 3, South Africa has to be a Windhoek beer, which although brewed in Namibia appears to be very well adopted - but a drop of nice red wine wouldn't go amis either. Japan is easy with Sake or Sapporo, both very easily sourced. The national beer of Argentina appears to be Cerveza Quilmes, they even sponsor the Argentine National Football team!

The only conundrum is what to have for the first match England are playing vs USA, I hate bitter, so the idea of an English beer is currently losing out to a Budweiser or 6?